Zombies limp across the field. Trumpets sound a blaring alarm. For seven minutes of the Friday night football game, Wauwatosa West is in a zombie apocalypse. The marching band puts on a zombie-themed performance at the halftime show of football games and at competitions, called “How to Survive a Zombie Apocalypse.”

“During the halftime show, we are one of your main sources of entertainment,” said Junior Ava Kellner, a marching bass drum. “We put on our seven minute show and really keep the crowd engaged and excited in between the first and the second half. “ 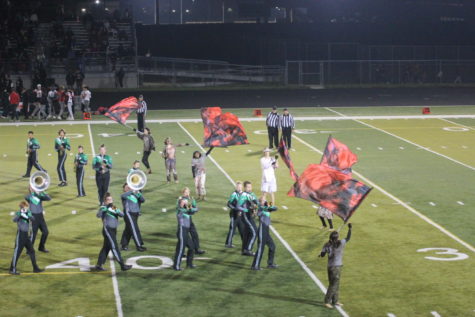 While the marching band’s focus is on the music, performance is a large aspect of marching. Players wear costumes and uniforms, and march in different directions and speeds. Color guard provides an important visual component with red and green flags. All of these aspects combine to make an impressive performance.

“I think that it’s just so unique and different from most of the other music ensembles that students get exposed to,” said Kellner. “It is just a very unique way of getting to perform on the instruments that they know and perform on so often throughout their entire careers, but on a football field while moving around. “

“It’s so much more high energy and fun. In a concert, [you’re] just sitting there and playing fancy music. In marching band you have so much to do. You’re like making a story through it,” she says.

Telling a story takes a lot of time. Practice started in the beginning of August with band camp. This intensive week-long program has practices from 6 to 8 hours per day in the August heat. After band camp, there were 2 rehearsals a week until school, and then 5 rehearsals a week during school. There are also more practices after school on Wednesdays for working with specific teams or judges.

“The most important thing I took away from marching band was time management,” says director Alex Hunt. “As well as being able to learn how to be a part of something that is bigger than just your own contribution, but rather that your contribution is part of a larger package and how you can be part of something that is successful by doing your individual job that makes the whole production better.”

Although marching band’s large time commitment can be seen as excessive, it allows players to become better players and better friends with their peers.

“My favorite part is definitely the people, and the amount of time we get to spend with them,” says Kellner. “Marching band is a big time commitment. So if you enjoy the people that you’re with, then it’s definitely a good experience and I enjoy that time that we spend together because we do practices, games, competitions, and then we also do outside activities like going to Culvers after every game, or something like that. So that’s definitely one of my favorite parts, just the bonding experience with the rest of the band members.”

Players in marching band must memorize their music as well as their positions and cues. Each player has 60 positions on the field, or “dots”. Players with additional roles like section leader or drum major have more responsibilities.

“We’re in front of the band, keeping them in time and having that as our responsibility to conduct but then outside of that we help plan a course for marching band or for the whole year,” said Strand, who is a drum major along with Dylan Heater and Steven Awve. “Mostly [we are]  just like the head of the band and help connect the bridge between Mr.Hunt, our director and then the band.”

Strand is in her last year of band at West. “I’m hoping to go to a school that has some form of band and hopefully marching band with that, because marching band is one of my favorite aspects of band. But if it doesn’t, then I’m going to miss it. It’s like my sport.” Strand says.

The East-West football game was senior night for the band. Strand has four older siblings who participated in marching band. She will be the last of her family to leave the marching band.

“I’m very excited because high school has been so hectic with COVID and everything, and I feel like we’re having a good season. We’re gonna be recognized for everything we’ve been through. It’d be a nice bonding moment.”