Behind the Scenes with the Cast 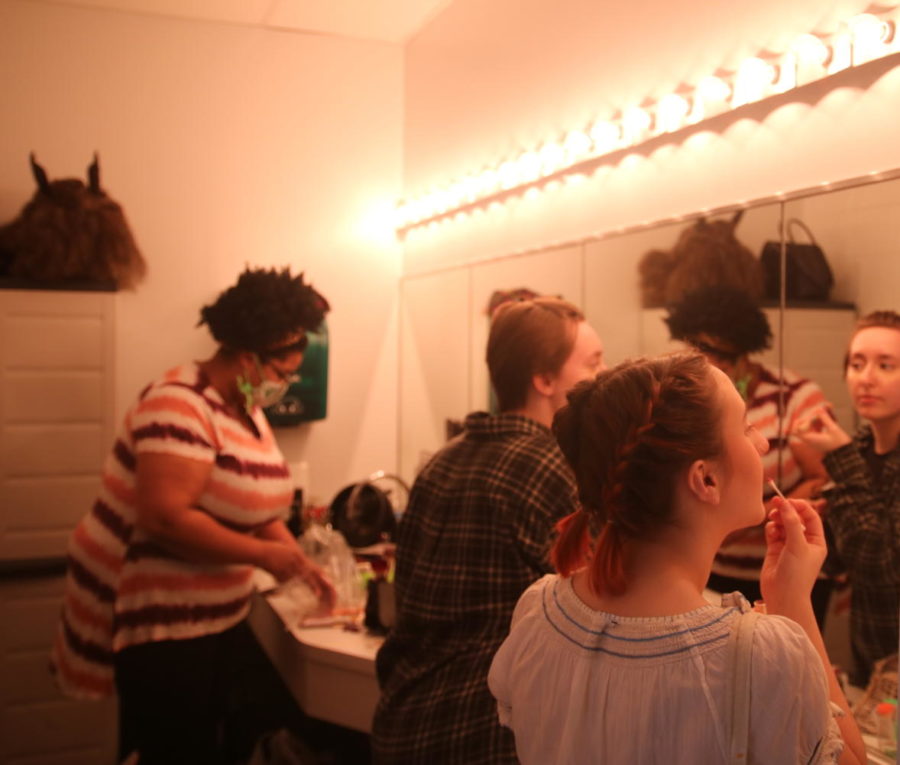 Wauwatosa West Theater presents their spring production of “Beauty and the Beast”  on opening night, Friday, March 4th.  Actors in the production are excited for their hard work to be shown on the stage, but the most important part of theater for many is the welcoming community off of it.

“The community that the theater has is really fun to be a part of, and we’re all super motivated towards a common goal and we just have a lot of fun together,” says Andrea Justin, Senior, who plays Napkin and Wolf.

The large time commitment of theater means that actors are able to spend a lot of time together.

“I really like the community. Everybody’s so welcoming. And in three months, you basically become a family and you get to create just amazing performances together,” concurs Sophomore Sawyer Vespalec, an ensemble member.

While the program focuses on drama, it also is a great place for actors to make new friends and socialize.

“My favorite part is the friendships you can make behind the scenes. While I’m doing the process of theater and rehearsing, I like making those friends and then doing all those things outside of the theater, like going to dinner after,” says senior and dance captain Payton Raue.

She thinks that theater has helped her with public speaking skills and perseverance.

“It’s definitely made getting in front of a group and presenting something a lot easier just because if I can sing and dance in front of hundreds of people, I can give a presentation in class. And then perseverance can help you learn to keep trying your best for everything that you do. Because you might not get a part that you want after an audition, but you can still keep working at it, and there’s definitely a lot of room to grow,” says Raue.

Theater can help actors build confidence outside of the stage, and learn how to get past worries.

“Even if you’re scared or worried or nervous, it’s totally worth taking risks. It’s an essential part of learning and developing,” says Senior Steven Peterson.

Peterson had never done theater at West before and now plays one of the lead roles of Gaston.

“I’ve never done this before. Like it was a little scary. I was not expecting a lead, and it was kind of surprising just being thrown into something that I’ve never done before,” says Peterson.

Preparation for the show comes with many challenges. Actors need to memorize their lines, their cues, and learn how to perform. One of the largest obstacles is the time commitment.

“Tech Week is really a lot. It’s seven hour rehearsals every day, and you’re just constantly practicing the same thing so it can get really frustrating when it doesn’t go right,” says Justin. “But it’s necessary for the final product.”

Tech Week is the week leading up to opening night. Students on run crew and cast rehearse the play and go through dance sequences. Practices can often last until 10 pm. This can take a toll on students because of how time consuming it is paired with school, especially regarding sleep.

“I think the most challenging part of theater is Tech Week because we’re there from school till 10pm. And then I have to do it every day of the week,” says Senior and villager in the production, Georgia Makal. “So I’ll be singing and I’ll be so tired that all of a sudden I can’t remember the words, but I still have to do it well, because I’m preparing for the show.”

Despite the challenges that come with theater, the cast is excited for the show.

“I just want theater to keep going how it is here. It’s so amazing that I can’t really think of any way to improve it,” says Vespalec.