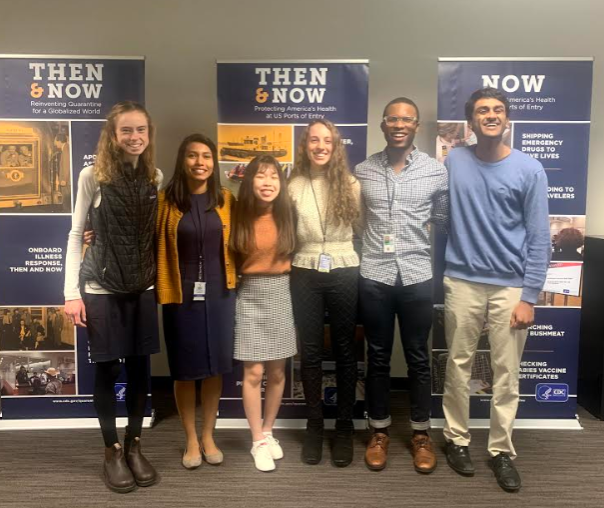 During Michael’s time at Wauwatosa West, he served as President of the Student Senate and National Honors Society in his senior year. He also ran track and played football.

Michael Green currently attends Dartmouth College in Hanover, New Hampshire, majoring in Anthropology with a minor in Environmental Sciences. He recently interned from January 2020 until March 2020 at the  Center for Disease Control (CDC) in Atlanta, GA.

“The first cases of the virus were identified in the first week of my internship. It spread very rapidly because in today’s day and age domestic and international travel is very easy,” said Green.

In early January till mid-March Dartmouth College sends 4 students to work in the Division of Global Migration and Quarantine at the CDC.

“ I became an anthropology major because the culture is important to me, and I feel like it’s important to consider when doing any type of work that involves people,” said Green.

With no hesitation, Michael submitted an application and completed a brief interview.  At Dartmouth, the Joan Sloan Dickey Center was a huge support in funding the internship experience said  Green.

“I went into the internship without much clarity on if I wanted to work in public health because I did not know how the field would look in the upcoming years given how little attention the current administration has placed on public health measures,” said Green.

Practically every task Michael did for his internship after the third week of January happened to be dedicated to the CDC’s response effort for COVID-19.

A major issue with the containment of the virus is that individuals can spread the virus without displaying symptoms for up to 4 days.

“ Additionally, because the virus is “novel”, essentially a variation of coronavirus we have not seen before, completely new test kits had to be made to identify it,” said  Green

To be an intern in a new environment especially during a global crisis can be a bit much. Michael was asked how he would describe the crisis in one word and he said “Confusion”.

“ It was very chaotic but exciting,” said  Green.

As a Junior in college managing a 10 week internship hours away from your normal environment sounds like a grand transition but for Michael, it seemed like a well-taken opportunity.

Dartmouth’s academic calendar is on a quarter system each term is 10 weeks. “ I did a full course-load during the summer quarter, so I was able to take this winter off from classes in order to pursue an internship opportunity,” said Green.

COVID-19 has been in the news since January. New cases and death rates have been reported daily and new information has consistently been rolling through our feeds hours at a time.

“Although this virus has escalated in many countries, American citizens overall did not start to use precaution until their day to day lives were dramatically affected (i.e. sports being shut down, malls and other places closing down),” said  Green.

A question was raised saying “ Will everything be ok?”. With new information being told to us consistently and a wide range of panic grows daily the truth is we really don’t know.

“ I feel that overall everyone needs to calm down and use common sense during times like these. Common sense often goes out of the window in times of widespread panic, but using common sense will ultimately be what reverses the trajectory of this pandemic,” said  Green.

Misinformation, false hopes, and truths can cause a large increase in panic throughout the lives of many individuals. Understanding what can be done to deescalate panic is what really needs to be discussed.

“Not spreading misinformation, not hoarding goods, and using proper hygiene. I see many people drawing large scale conclusions based on the news headlines they have seen from the past week or so,” said  Green.

Spreading misinformation will only prolong the negative effects of this outbreak. Additionally do not put someone’s life in jeopardy just for your short term gratification.

“I see many of my peers and people across the world going on vacations right now during a time where really no nonessential travel should be conducted. Even if you believe that you can survive this virus if you pass it onto someone immunosuppressed while going on a nonessential trip internationally and they pass away, that’s blood on your hands,” said Green.

Having meaningful internship experiences is just as valuable if not more than your coursework. Internships are opportunities where you learn what it’s like to work, as well as what you like and dislike before taking on the real job.

Michael said “I learned that I prefer working at a standing desk and that working at a government agency is very dependent on the chain of command. If you want to advance through the ranks, you have to spend time in the system.”